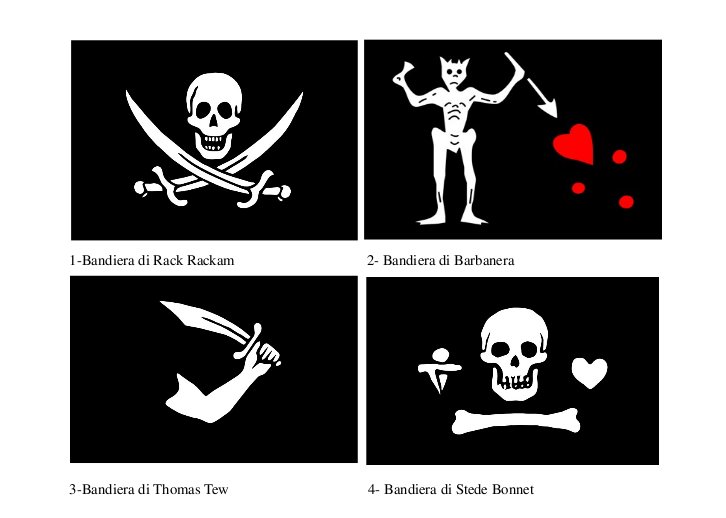 What is the difference between: pirate, buccaneer, corsair, filibuster, Barbaresco …

Everybody have heard about pirates, buccaneers and corsair (and maybe also about filibuster and barbaresco), but have you ever wondered which are the actual differences between them?

Each of these groups of seamen dedicated themselves to make a living out of (more or less) criminal activities on the seas. With the end of the golden age of sailing, these terms slowly lost their relation with daily life, and finally overlapped.

The term Pirate indicates sailors who despoiled or sunk other ships at sea, in harbour, or in rivers. The term is still used today, and still indacates simple and pure criminals of the seas.

The Corsairs, also called “prevateers”, served instead an official institution (like a government) under a formal contract (“letter of marque”), and ceding a percentage of the profits in exchange for a “Combatant Status” and a personal flag, that authorized them to attack and rob only enemy merchant ships, and to kill, as long as it was in combat. The basic difference between pirates and privateers was that, if they were captured, privateers were considered prisoners of war, while pirates were executed summarily as common criminals.

The term Boucanier comes from the French “buccaneer”, a word used to indicate poachers, As all hunters, buccaneer used to cook their meals on a grill. This method was called “barbicoa” (a term from which the modern word “barbecue” derivates), and it was used by a Santo Domingo tribe. In the 17th century, the word was related to caribbean pirates based on Hispaniola, Tortuga Island and Port Royal.

The word “Filibuster” originates from the French term “flibustier” (“filibuster” in English, “filibustero in Spanish”), derived from the Dutch “vrijbuiter” (roughly “freebooter” in English), referred to somebody who freely loots. At the beginning of 17th Century, a group of French and British sailors were expulsed by the Spainiards from the Island of St. Christopher (nowadays known as Saint Kitts). Leaded by Pierre Belain of Esnambuc, they took refuge on the Tortuga Island, north of Haiti. There, they were joined by a few hundred Dutch, also expulsed by the Spaniards from the island Saint Croix and few other English seamen from Nevis Island. These group became the first filibusters. They were active for about a century, attacking Spanish merchant ships, unofficially on behalf of their home countries. Later the filibusters were joined by the buccaneers of Santo Domingo and Tortuga.

The Barbaresco were active from the 16th Century until the early 19th Century throughout the western Mediterranean and along the Atlantic coasts of Europe and Africa. Their basis were the strongholds scattered along the coasts of North Africa (mainly Tunis, Tripoli, Algiers, Salé and other ports in Morocco), in those areas that the Europeans called “Barbary” or Barbary states. They extended their domains in Iceland and even Greenland. During the last phase of caribbean piracy era, the famous Jolly Roger (the balck flag with skull and bones) appears, with variations that indicated different “families” of filibusters.