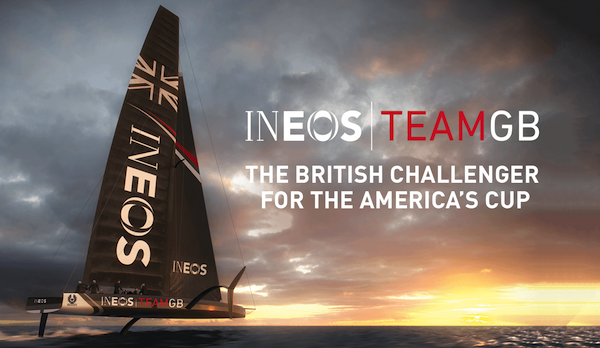 Sir Ben Ainslie has announced a radical shake-up of his America’s Cup team, with INEOS, one of the world’s largest manufacturing companies, ploughing £110 million into his challenge to bring sport’s oldest international trophy back to Britain.

As part of its investment – the biggest ever British America’s Cup investment – INEOS will take over naming rights, with Ainslie’s name no longer forming part of the official team title.

The Portsmouth-based team will henceforth be known as INEOS Team GB, as opposed to Land Rover BAR [the BAR having stood for Ben Ainslie Racing].

The deal, which was announced on Thursday morning at the Prospect of Whitby pub in Wapping, one of London’s oldest maritime pubs, will effectively see INEOS ‘hire’ Ainslie’s race team lock-stock, with most of the key players remaining in situ. Ainslie will stay on as team principal, Grant Simmer as CEO, Nick Holroyd as Chief Designer, Jono Macbeth as sailing team manager and Giles Scott as tactician.

The massive injection of cash will allow Ainslie and his team to properly fund a two-boat challenge for the 36th America’s Cup, which will take place in New Zealand in 2021.

“This is an amazing boost for British sport,” Ainslie commented. “With this significant commitment from INEOS to fully fund a two-boat challenge, Britain now has its best opportunity to bring the America’s Cup back home to Britain where it belongs.”

The America’s Cup was first held off the Isle of Wight in 1851. It was won by the US yacht ‘America’ and has never returned to Great Britain.

Ainslie was part of the American team that won the Cup in San Francisco in 2013. The four-time Olympic dinghy champion then formed BAR, who were knocked out of the 35th America’s Cup in Bermuda at the semi-final stage by eventual winners New Zealand.

Jim Ratcliffe, the founder and chairman of INEOS, added: “With the resources of INEOS, the skill of Sir Ben Ainslie and his team and the experience of the Royal Yacht Squadron, I think INEOS Team GB has a great chance of success in 2021 and I’m looking forward to the challenge.”