Muller is Stanford’s first America’s Cup sailor since Malin Burnham ’49. Muller, who was a four-year letterwinner from 2014-18 and won three PCCSC Men’s Singlehanded Championships, is part of the initial roster of 17 sailors who will train and compete with the team. 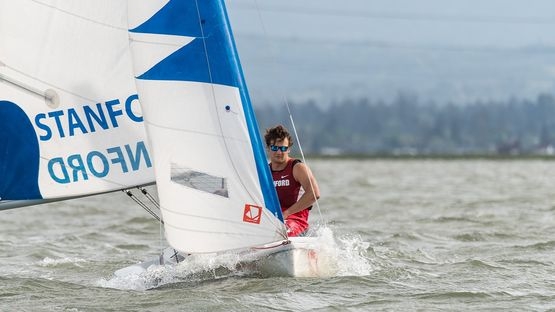 The accomplished group includes nine Americans and sailors from four other nations. The 36th America’s Cup will take place in March 2021 off Auckland, New Zealand.

“We’re excited to announce the names on our current sailing team, and continue the process of building a focused and successful program,” said Terry Hutchinson, Skipper and Executive Director of American Magic. “Every personnel decision we make in this campaign will be with a single goal in mind, and that is to win the America’s Cup in 2021. With the support of our 90-strong collection of world-class designers, boatbuilders and staff, our sailors will be capable of accomplishing that goal.”

Eight American Magic sailors are Olympians, with two medals won, and the roster has earned over 60 world championship victories in various classes.

American Magic sailors who are also Olympic hopefuls on the US Sailing Team will be given the flexibility to pursue their campaigns for Tokyo 2020 while operating as part of the America’s Cup team.

“This team roster includes a great balance of proven experience and youth, and will help establish the next generation of America’s Cup talent in the United States,” said Hap Fauth (Naples, Fla.), Team Principal and CEO of American Magic

The team is one of three confirmed Challengers set to compete for the Cup against the current holders, Royal New Zealand Yacht Squadron and its defending team, Emirates Team New Zealand. To date, Luna Rossa Challenge from Italy and INEOS Team UK from Great Britain have also been announced as Challengers.

“Racing for the America’s Cup is a dream shared by all competitive sailors,” said James Lyne, head coach of the team. “American Magic is a once-in-a-lifetime opportunity for our athletes. We are led by a great group of principals, have talented designers, experienced builders, and we are representing New York Yacht Club, with its unmatched America’s Cup history. The stars have aligned to give us this chance to win back the Cup for the United States.”