The return of America’s Cup activity to Rhode Island shores is expected to strengthen the local marine industry, attract additional design and engineering talent to the state, and continue a storied boatbuilding legacy in the town of Bristol. 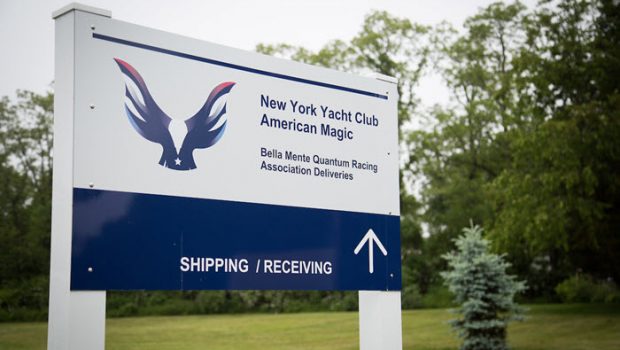 To date, Fauth has built two highly successful racing yachts in the state at New England Boatworks (NEB) in Portsmouth. A third boat, which shares the name BELLA MENTE with its predecessors, is currently under construction at that company.

“Rhode Island has long been a global center of composite technology innovation, and our new America’s Cup team is pleased to add to an amazing legacy that began well over a century ago,” said Fauth.

The team is ramping up for the next edition of the America’s Cup to be held in March 2021 in Auckland, New Zealand. The U.S. team will build two AC75 class boats, a new design for the 2021 event. The AC75 is a 75-foot mono-hulled boat that utilizes advanced hydrofoils to sail largely above the water. Under the rules of the event, each team will be allowed to construct two AC75s prior to the America’s Cup. The competing boats will race with a crew of 11 sailors each.

“American Magic’s decision to choose Bristol for their new boatbuilding facility is a real vote of confidence in the Rhode Island marine industry as a whole,” said Andy Tyska (Bristol, R.I.), a board member of the Rhode Island Marine Trade Association (RIMTA) and a member of the Bristol Town Council. “We expect that the team’s multiyear building project will have a positive economic impact on our area, and help expose Rhode Island’s world-class composite and marine technology capabilities to audiences around the world.”

The New York Yacht Club held the America’s Cup for over 132 years from 1851-1983, in what is often said to be the longest winning streak in sports history. Memories and symbols of previous America’s Cup regattas continue to form a core part of Rhode Island’s worldwide appeal and image, and the America’s Cup Hall of Fame is located at the Herreshoff Marine Museum in Bristol.

Prior to the 2021 America’s Cup and preliminary regattas, American Magic plans to test their AC75’s on the local waters of Narragansett Bay. In doing so, the team will follow in the wake of generations of Cup-contending sailors, designers and boat builders who turned the bay and Rhode Island Sound into hallowed racecourses.

Rhode Island’s Herreshoff Manufacturing Company (1878-1945) built their first America’s Cup “defender” yacht, VIGILANT, in Bristol during the winter of 1892/1893. This was the first in a long line of boats that defended the America’s Cup between 1893 and 1934, designed by legendary Rhode Island Naval Architects Nathanael Greene Herreshoff and Starling Burgess.

Many other America’s Cup defending and challenging boats were also built in the area, including a series of boats constructed by Goetz Composites in Bristol and by New England Boatworks.

“Our boatbuilding team is looking forward to working on and supporting the American Magic AC75 build projects,” said Tom Rich, Co-Owner of New England Boatworks. “Our experience working on-state-of-the-art projects like the BELLA MENTE yachts will allow us to manufacture key elements of the new Cup boats, which will undergo final assembly in Bristol.”

The team will look to mobilize local industry while also recruiting some of the world’s top international engineers and boatbuilders to the state. The combined expertise of the local and international engineering talent assembled for American Magic’s campaign will serve to reinforce Rhode Island’s status as a global center of composite technology innovation.