A noted French yacht designer has produced the first scaled down version of the new foiling America’s Cup monohull with an eye on the public market.

Philippe Briand has designed more than 12,000 boats and been heavily involved in the America’s Cup programme since 1986. He has six Cup campaigns to his name since his first design involvement as an 18-year-old.

Briand has talked up the radical concept introduced by Emirates Team New Zealand for the 2021 America’s Cup in Auckland and replicated the main features in a 6.5m version called “Flyacht” that can be sailed by a crew of two. 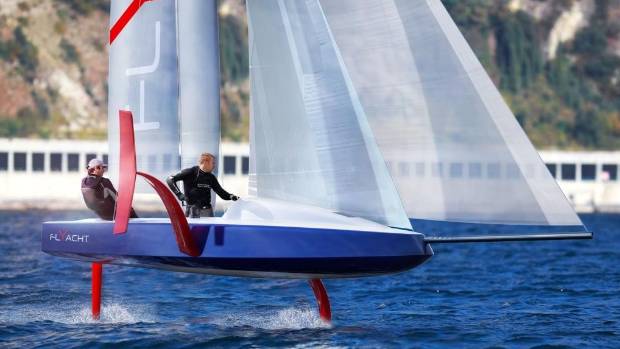 It’s the first evidence of Team New Zealand’s philosophy for the next Cup that these foiling monsters can produce innovations and benefits for the weekend sailor.

“Both my team and I are passionate about the America’s Cup, having been ‘main designer’ of no less than six campaigns. This is why we were among the first to design the concept of an AC75 and complete a preliminary project,” Briand told La Stampa in Italy where interest in the Cup is building with the prospect of two challangers.

“The flying monohull is the ideal solution if we think that one of the objectives of the Cup is to allow technological development to always be at the forefront of the sailing world and to ensure that the America’s Cup remains the most important sailing event in the world.”

Briand said he had been “pushed to the limits in my work as a designer”, in a quest to transfer the benefits of innovations from the racing sector to a wider market, but keeping costs reasonable.

“What I want is to make the generation of ‘millenials’ understand how much fun and how much adrenaline there can be in sailing. And the first step towards this dream will be to see the AC75 in action in 2021.”

He said the new boat combined the best qualities of multihulls, with their high speed and innovative design, with the navigation modes of monohulls.”

Like the AC75, the “Flyacht” features T-foils coming out of the two sides of the boat and a soft wingsail.

He believes his smaller version will be able to foil in 10 knots of wind.

The America’s Cup teams, with the class rule now in their hands, are busy working on their first AC75s. They are allowed to build two for the 2021 Cup with the first to be launched after March 31 next year with an eye on the America’s Cup world series events still to be announced.

The teams’ second boats can only be launched after February 1, 2020.